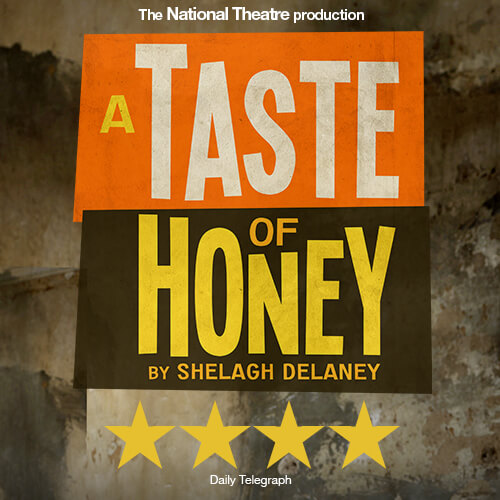 A Taste of Honey

See the cheapest tickets available for A Taste of Honey, any date

See the last minute tickets available for A Taste of Honey

Shelagh Delaney’s ground-breaking British classic A Taste of Honey returns to the West End for the first time in 60 years.

Directed by Bijan Sheibani (Barber Shop Chronicles) and designed by Hildegard Bechtler (Antony and Cleopatra), A Taste of Honey is a gritty depiction of working-class life in post-war Britain and an exhilarating portrayal of the vulnerabilities and strengths of the female spirit in a deprived and restless world.

Jodie Prenger (Oliver!, One Man, Two Guvnors) leads the cast as Helen in an exciting staging featuring original compositions - influenced by blues and soul music - by Benjamin Kwasi Burrell, and rearranged songs from the jazz era, performed live by an on-stage three-piece band and sung by the cast.

When her mother Helen runs off with a car salesman, feisty teenager Jo takes up with Jimmie, a sailor who promises to marry her, before he heads for the seas. Art student Geof moves in and assumes the role of surrogate parent until, misguidedly, he sends for Helen and their unconventional setup unravels