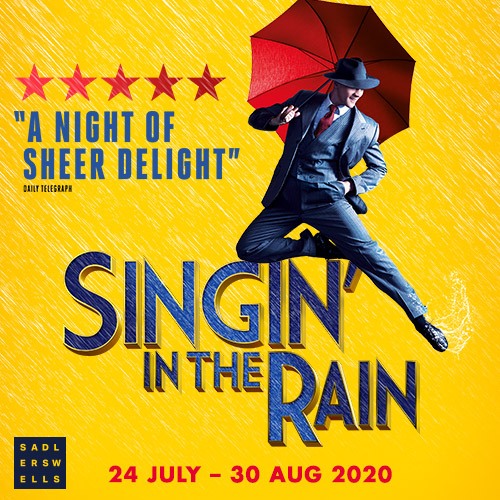 Singing In The Rain

See the cheapest tickets available for Singing In The Rain, any date

See the last minute tickets available for Singing In The Rain

Based on the classic Metro-Goldwyn-Mayer film

Song-and-dance legend, Adam Cooper, reprises the iconic role made so famous by Gene Kelly in Jonathan Church’s critically acclaimed production of Singin’ in the Rain. A smash-hit at Chichester Festival Theatre and in the West End, this irresistibly charming show returns to London in 2020 to make a summer splash!

Andrew Wright’s high-energy choreography and Simon Higlett’s sumptuous set design (including over 14,000 liters of water on stage every night) combine with the charm, romance, and wit of one of the world’s best-loved films. Singin’ in the Rain features the glorious MGM score including Good Morning, Make ‘em Laugh, Moses Supposes and the legendary Singin’ in the Rain.

Don’t save it for a rainy day, book your tickets now!

We don’t often welcome the rain in the West End but for the return of one of Hollywood’s most celebrated musicals we’re willing to pack our umbrellas and make an exception.

As in celebration of the 60th anniversary of Singin’ in the Rain, Jonathan Church brings this much-loved classic to the stage at London’s Palace Theatre.

And with the 1952 MGM film, starring Gene Kelly, Donald O’Connor and Debbie Reynolds, regarded as somewhat of a legend by many contemporary critics, he and choreographer Andrew Wright certainly have their work cut out.

Set in Hollywood, the story follows successful silent movies star Don Lockwood as he tries to overcome a change in the film industry where ‘talkies’ – films where actors talk, sing and dance – are fastly becoming the media of choice.

Considered one of the most beloved and enduring movie musicals of all time, Singin’ in the Rain is not only known for its spectacular dancing but also its impressive score, featuring songs by Nacio Herb Brown and Arthur Freed. Favourites include ‘Make ‘em Laugh’, ‘Good Morning’, ‘Moses Supposes’ and ‘Singin’ in the Rain’.

Following an extended sell-out stint at the Chichester Festival Theatre, the West End cast includes the multi-award winning Adam Cooper as Don Lockwood, Daniel Crossley as Cosmo Brown, Scarlett Strallen as Kathy Seldon and Katherine Kingsley as Lina Lamont. Michael Brandon, who is best known for playing Dempsey in the television series Dempsey and Makepeace and the title role in Jerry Springer - The Opera, will also reprise his role of RF Simpson.